Go Ahead, Make My Day! 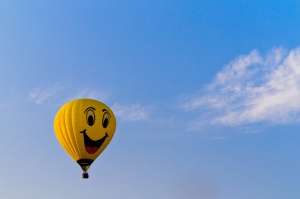 If not mine, why not someone else’s?

Has anyone ever said something to you that immediately lifted your spirits?  Likely, so you’ll understand how I felt in the following situation.

Twice in as many months, complete strangers have come up to me and said “I love your hair colour!”

I am a 40-something woman and my hair is its natural colour – grey.

These women have gone on to tell me that they have been thinking of letting theirs go grey and after seeing mine, they are convinced that they want to go through with it. I am complimented beyond belief and when we part, I walk away feeling a little bit taller, somewhat proud, definitely happier, which in turn makes me more pleasant to the next people I meet.

I have had a few others strangers over the years say the same thing and it always comes at a time when I am seriously considering dyeing it. Their unprompted comments give me a boost and literally “make my day”.

We are suspicious of compliments from the familiar people in our lives.

They’re only saying that because they feel they have to.

They don’t want to hurt my feelings.

They don’t really mean it.

However, if a completely unknown-to-us person, a random individual, goes out of their way to tell us something, then it must be true and no matter how many others have told us the same thing, we can finally believe it.

How frustrating for all the others! When you tell them that a complete stranger said such-and-such to you, their response is no doubt “I know! I’ve been telling you that for years!”

One day, my mid-teen son and I were in a local sandwich shop and we were served by a young man in his late teens/early twenties – an employee, not the owner. In fact, the owner wasn’t even on-site – I know because I frequented this particular shop. Also, I had never met this young man before.  We received enthusiastic, polite and pleasant service for the entire time that it took him to make our order and cash us out.

Barely outside the door, my son commented on what a nice guy he was and what great service he gave us.  We both remarked that you don’t often get that kind of service and I noted that he should keep that in mind when he begins working. He agreed that it definitely made a difference in our experience.

My son witnessed customer service at its best, we discussed its benefits and I hoped he filed it away for future use. I had done my job.  I could have left it at that – but I didn’t.

The next week when I went in to pick up a sandwich for lunch, the owner was there. I asked to speak to him. He stepped aside with a worried look on his face. This was an unusual request from me. What was I going to say? What was I going to complain about?  I started off by telling him that my son and I had been in and two young men were working the counter and he was not on-site.  The look of worry increased. Then I went on to sing the young man’s praises.  Worry was replaced with relief and then pride. I had made his day – and I hope, reciprocally, the young man’s.

We don’t hesitate to complain about bad service so why don’t we also praise great service? Who knows, the manager may be looking to advance an employee to another level, or it may be review time and your comment could end up meaning a salary increase to someone who desperately needs one.

We don’t realize the power of our words – a stranger’s unbiased, therefore they must have some truth to them, words.

So the next time you get great service, make sure the manager hears about it.  And when you see a stranger in the check-out line, on the bus, or in an elevator and you think “What a beautiful coat”, “Nice shoes” or even “Great hair!”, tell them.

Go ahead. Make their day.

*This post was written before my resent Liebster Award nomination. Talk about making my day!!